Title translation: Car in Sight! Half a Century of Chilean auto racing through the traces of Juan Zanelli

Juan Zanelli was the most successfull Chilean racing driver ever, though Eliseo Salazar was more famous in his own country.

Rodrigo Velasco was surprised that this racing driver, reasonably well known in Europe, he won the Bugatti Grand Prix two times, was totally unknown in his own country. He wrote book not only about Zanelli, but about all Chilean racing history until the 1950's, when the only Grand Prix in Chile was held, in 1950, and won by the great Fangio.

Juan Zanelli, Chilean Consul in France, did not just drive Bugattis, but also Alfa Romeo, Nacional Pescara and other marques. 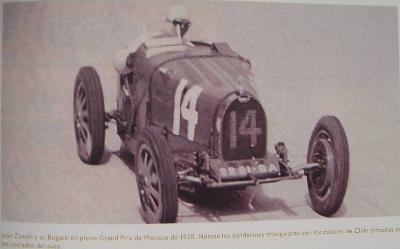